The text below is meant to serve as a walkthrough for the work you see in the gallery, which opened Thursday, November 8th, 2018 (with a reception from 6 to 8 PM)

The works are organized by the order in which they were conceived.

Over the past year of my artist-in-residency at TCC, there have been some unexpected events in my life, which affected this body of work. For example, my 98-year-old grandmother died. With her death, I became aware that each person in a family serves as a custodian for their family’s history. However, the role of custodian was simply inefficient in my grandmother’s matriarchal eyes. She felt that her God-given role was editor-in-chief, only telling the parts of our history she wanted you to know. Although, with time and a massive clean out of my grandmother’s personal letters and documents, we found that another version of our history survives. A history, oddly enough, written in Swedish– a language in which my grandmother couldn’t read. In a quest to discover more about myself and my family, I began with the first most logical step–to learn Swedish.

Meaning in a name

The title of the show “Metalängen” (meaning “the metal meadow”) is my attempt to redefine home through the use of Swedish combination words. In the same way, that “turtle” also means “shield-toad” in Swedish. When I look around I feel like I live in “the metal meadow”, a land where the length of wires and rebar exceed the roots of trees and flowers. This re-defining of home extends from the memories of my youth. As a child, I watched suburbia encroach upon the wild forests that surrounded my backyard, in a ferocity that I never forgot. The places I knew to pluck snails, the burrows of blind skunks, and the clearings in the trees, where patches of colorful flowers grew–all swept away in the name of progress.
The ideas for the artworks in this show are spun from personal memories, interactions with nature, and a rediscovery of my own family history. Many of the works are designed to be touched and played with, in the same way, you would brush your hand against the leaves of a tree or wind-up grandma’s music box. Each person who interacts with the work, causes the story of the object to change and take on new meanings. By the end of the show, the artworks will no longer contain only my memories, but the memories of the viewer as well.

In the post-panic meltdown of creating a body of work for this show, I started to wish that I could talk to my younger self. Making art is not perfect nor a linear thought process. The path of getting ready for an art show is fraught with doubt, anxiety, and stress especially when the pieces do not materialize in the way that I envisioned them. Parts break, new materials catch on fire, and budgets run out, yet the show must go on. Often art exhibitions glaze over the actual struggles and disasters that exist and are necessary to create works of art. This show grapples with a multitude of emotions, ideas, materials. Each micro series of works represent the distillation of time, events, struggles that affect an emerging artist.

Initially, I explored an idea that still fascinates me, electrified nature. I thought that I could fill a room with ikebana inspired floral arrangements. As the months slipped by and all I had were a handful of electronic weeds — I panicked. The reality of producing a myriad of electric flowers and the time it would take to create an exhibit ultimately fizzled out because it wasn’t practical within the scope of the residency. The flowers you see are the remnants of unfinished ideas, although beautiful I still feel a sense of regret for not seeing these through.

Continuing my exploration of nature and electronic things, I thought of making a musical snail. A snail shell is acoustic and it would lend itself to an electronic musical sculpture. This proved harder than I expected to translate into a refined artwork. Throughout the process of creating this show, I attacked this idea of a musical snail many times, and in many forms. As I attempted to coalesce this idea into reality, my execution of the forms became lost in the complexity of their creation. The current versions of the musical snails are still a work in progress.

You, the viewer, have to open up a shell and crank the mechanism which plays a song. The song that is transcribed on the long sheet of paper above you is “China Gates” by John Adams. 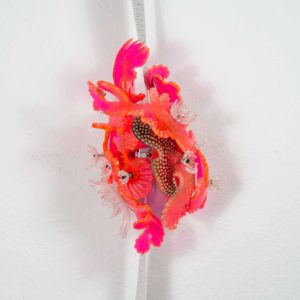 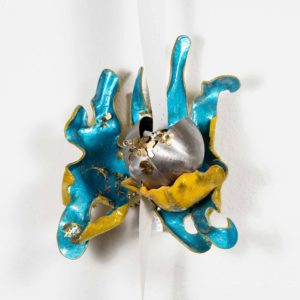 This series represents the death of painting for me. Although each work has a correlation to elements of traditional painting; these works translate painting into sculpture designed to be touched. The dark blue cape on the mannequin is even more free as it is meant to be taken off and worn, selfied and hashtagged then put back on the mannequin for the next person to enjoy.

What you see, are the working prototypes for an outdoor installation which I promised as part of my Artist-in-Residency. The formal title of these plastic succulents is, “Familia de Carnegiea Fantasma” (the ghosts from the Carnegiea gigantea Family) These plastic plants are ghosts (translucent memories) from our future which has run amuck with concrete, metal, and plastic. A future where this installation has yet to be revealed. Please return to the campus Spring 2019 to see the full family portrait. 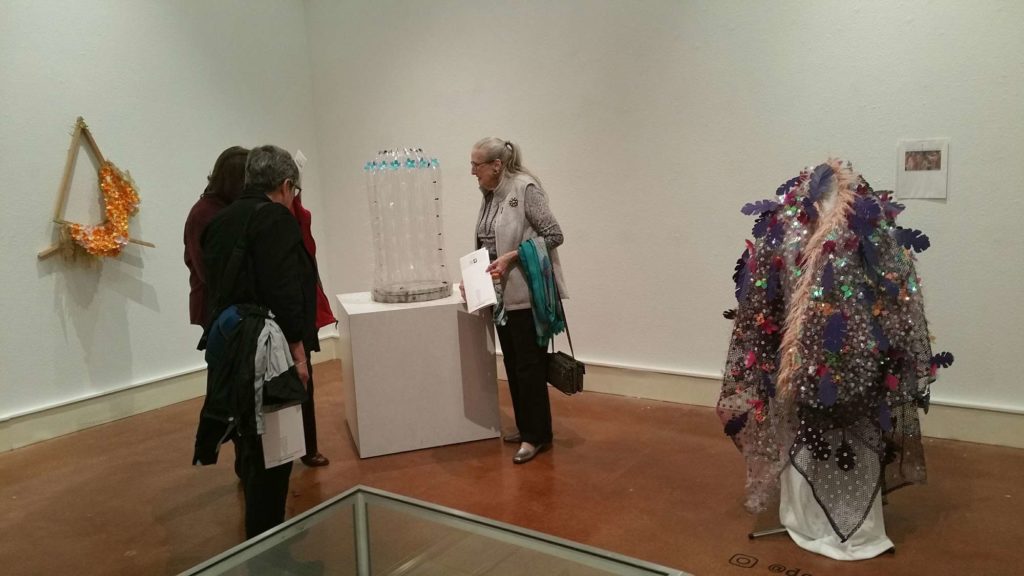 These glass display cases house the drawings, ideas, and attempts that were necessary to create the finished works on the walls around you. I think a lot of artists don’t realize the necessity for failure in art. These display cases are a reminder to embrace discovery and accept the inevitable failures that are necessary. 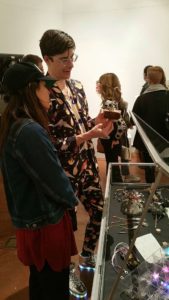 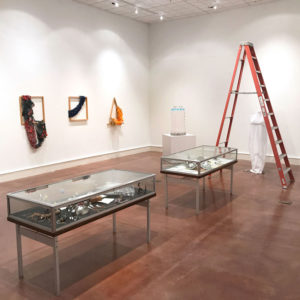 I included books from my personal collection that I read during this residency. These books helped inspire and inform me. Feel free to sit in the chairs and read them. But please but don’t take them because I haven’t finished some of them and I really hate cliffhangers.

I would like to thank the following people who aided me in taking the ideas out of my sketchbooks and into physical space:
Dimitri
Logan
Liz Covert
Jean Gilbert
Pat Gilbert
Joshua Goode
David Landrith
Julie Landrith
Joshua Landrith
Seth Lorenz
Katerina Winters
CW

***the images below are a mix of formal exhibition shots and images taken from attendees who posted their experiences on their various social media accounts.