Jeff grew up as an indentured servant on his parent's hobby farm in Scarsdale, New York. There he was forced to plant, weed, mow, pick fruits, flowers and vegetables on 8 acres replete with acre vegetable gardens, a Versailles style formal flower garden, a 100 tree fruit orchard and enough rhubarb to have to have it every day, all year long until he went to college. Jeff is an extremely respected and popular national garden writer. He is the former president of the Garden Writers of America, was made a GWA Fellow in 1999 and was inducted into the GWA Hall of Fame, the highest honor a garden writer can achieve, in 2005. Most important, Jeff is the founder of a now national program that started as "Plant a Row for Bean's," the soup kitchen in Anchorage, and is now "Plant A Row for The Hungry." The program is active in 48 states and resulted in over a million pounds of produce being donated to feed the hungry every year. 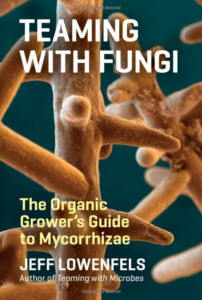 Teaming with Fungi: The Organic Grower’s Guide to Mycorrhizae

This review is pending because I’m still reading the book.

Dig my other Amazon finds